Max Jury is a 26-year-old singer-songwriter from Des Moines, Iowa who now lives in Paris, France. His new album 'Modern World' is a beautiful and graceful record about life, friendship and facing each day with clear eyes which offers the perfect antidote to the overwhelming onslaught of contemporary life.

In 2016, Jury's eponymous debut album spawned his massive breakthrough hit 'Numb', which has now been played over 26 million times on Spotify alone.

However, behind-the-scenes all was not well. Even as that highly-acclaimed single was being released Jury, who was then just 23, was checking himself into rehab to address an ongoing struggle with alcoholism.

"My drinking was affecting both my personal relationships and my work," he reflects now at home in the 10th Arrondissement. "This album is the first music I've ever written and recorded sober. My perception is that it's more disciplined, thought-out and better executed than anything I've done before."

The album explores how Jury rebuilt his life while also dealing with many of the issues that affect his entire generation: loneliness, the search for redemption and millennial ennui.

"Life is better than it was, certainly, but I'm also having this strange existential crisis because all of these problems that were easily suppressed before are now out in the open," he explains.
"At the same time, it was so rewarding. Making this album I rediscovered who I am, as an artist, a vocalist and a songwriter. It was like starting over."

Stand-out songs like the title track and 'Primrose Hill' deal directly with this process of renewal. He describes 'Modern World' as "one of the most personal songs on the album," and says: "I was in this kind of fractured mental state, and I felt like I was caught up in a cycle of going through the same motions, day after day. I decided to make a soul song about it. I knew I had to do something fresh and exciting with it musically, because otherwise it's going to be too sad and nobody's going to want to listen to it."

He chose that particular song to give the album its title because of the way it invokes the often paralyzing effect of trying to make your way through the times we find ourselves living in. "Back in the states, I was operating in my own little bubble, I sort of blocked out the rest of the world" he says. "When I snapped out of it I felt like I woke up in a whole different place and time. It was exhausting to try and navigate all that. It's not a political album, it's a personal album, but I think a lot of people would agree that current things like social media are starting to seem unhealthy. These days it feels like there's a weight which overarches everything."

On 'Primrose Hill', Jury sings of "fair-weather friends" who "couldn't find someone else to get loaded up with". This was something he experienced first hand after returning to his adopted home of London after rehab. "I realised that all these friends I had made were party friends," he says. "I'm not saying it was a waste of time, you meet interesting people and have some fun experiences, but when you stop you realise how much of your life was devoted to it all ."

Musically 'Modern World' is something of a departure from Jury's first record. He became intoxicated with jazz musicians, particularly vocalists like Ella Fitzgerald, Johnny Hartman and Chet Baker along with the incredible musicianship of the likes of John Coltrane, Miles Davis and Donald Byrd. Those influences filter into 'Modern World' alongside more contemporary touchstones such as Phoebe Bridgers and the electronic pop production values of Kanye West.

His voice too has developed, becoming an androgynous instrument that dances across his music. While Jury's debut album was steeped in Americana and informed by his life experiences in a small town, 'Modern World' is a metropolitan soundtrack shaped inexorably by Jury's experiences living in Los Angeles, where he had moved with the intention of broadening his horizons both personally and musically.

'Modern World' was produced by Robin Hannibal, the four-time Grammy-nominated producer and songwriter who is perhaps best known for his co-writing credit on Kendrick Lamar's 'Bitch, Don't Kill My Vibe'. Jury met Hannibal in 2017 shortly after his move to Los Angeles.
Their very first session working together produced 'Sweet Lie', the ecstatic, modern soul song which will be the lead single taken from the album.

"Robin does this sophisti-pop, neo-soul thing that I was really interested in combining with what I had to bring to the table," says Jury. "'Sweet Lie' was the starting point of our relationship. It started out as a Chet Baker-style thing on a Fender Rhodes keyboard, but Robin said he'd like to try and pick up the tempo and turn it into something a little groovier. I thought that sounded interesting. I've spent my whole life sitting at the piano and playing sad songs. When you're in your bedroom writing your first record, the songs just come out. You don't think about being on stage and playing them live. Now that I'm playing shows and doing all these festivals, I wanted to have something that everyone can move to."

After successfully collaborating on 'Sweet Lie', Jury invited Hannibal to produce the whole album. It was recorded at The Ship studio in Eagle Rock with a hand-picked band of Los Angeles' most talented session musicians: guitarist Joel Van Dijk, drummer Bill Campbell and bassist Thomas Drayton, who's the son of Motown legend Clay Drayton and also the musical director for Childish Gambino. " I've never worked with a bass player like him," says Jury. "He just knew what to play instantly. I know it sounds cliche but he just had the music in him!"

The album's gorgeous string parts were written and arranged by Amie Doherty, a composer who has previously worked on films like 'I, Tonya' and television series including 'Fargo' and 'Altered Carbon'. "I had an idea of what I wanted but she came in to facilitate all that," says Jury. "She was really sweet and really talented."

Having written over 100 songs during the album's year-and-a-half recording process, Jury believes the ten that finally made the cut describe not just how his own life has changed and evolved, but also how many of us feel living through these strange and confusing times.

"There's a paradox to it," he smiles. "It's a croonery, romantic, sentimental record about not quite being sure what you're doing with your life, or what your friends are doing with their lives. It's a weird combination, but I thought it might work." 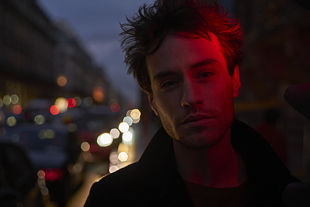