It doesn't happen very often, but every once in a while a band comes along who have crafted a sound that's so unique it's hard to believe they haven't been playing together for decades. For the past four years, the members of Tallahassee, Florida's Mayday Parade - vocalist/keyboardist Derek Sanders, bassist Jeremy Lenzo, guitarists Alex Garcia and Brooks Betts and drummer Jake Bundrick - have been perfecting their unique brand of pop-inflected punk rock, a process that is currently culminating with the release of their major-label debut 'Anywhere But Here'. "We really just wanted to follow our own path on this record and not worry about if we fit in anywhere," Bundrick explains. "We were striving to make a record that meshed together really well and that was actually an album in the sense that all the songs sound different, but are working together toward a common theme."

In order to accomplish this the band decided to work with acclaimed producer David Bendeth (Paramore, Underoath), who proved to be the perfect person to capture the inherent energy and enthusiasm of these eleven tracks. "It was a totally new experience going in and doing a record with someone like David Bendeth, but I really feel like these songs are much more structured than anything we've done in the past," Garcia explains.
In fact the biggest challenge while making 'Anywhere But Here' seems to have been Mayday Parade's monumental task of determining which of the 50-odd songs they'd written over the past few years would make the cut. "Some of the songs we all agreed on, but other ones were more difficult because people had different tracks that they loved and it was hard to narrow it down," Sanders elaborates, adding that the band wrote many of these tracks during last year's tour with All Time Low.
"We just ended up taking a vote and I think we chose the right songs."

Correspondingly 'Anywhere But Here' shows how versatile Mayday Parade are, a fact that has endeared the band to fans all over the world and helped them forge their own niche in the rock community. "For me 'Kids In Love' is about the summer I turned 17 and I felt like I could take on the world," Sanders explains when asked about the album's infectious opener, a sentiment which is communicated via an impossibly catchy chorus. While 'Anywhere But Here' is teeming with soaring and instantly accessible anthems like 'Anywhere But Here' and 'Get Up' which showcase Mayday Parade's knack for crafting hooks, it also features heartfelt ballads such as 'Save Your Heart' and melodic midtempo tracks like 'Bruised and Scarred' that reveal how much the band have grown since their 2006 debut 'A Lesson In Romantics' and also prove that when it comes to Mayday Parade, songwriting takes precedence over gimmicks or fleeting fashions.
"That's what I love about what we're doing," Bundrick elaborates when asked how he feels about the fact that the band haven't confined their music to just one scene or genre, "we're able to jump in and play with everyone from pop music to heavier rock bands and be able to gain all different kinds of new fans." Lenzo concurs, adding "I'm proud to be in a band that can reach out to so many different people and I really think that's always been a defining aspect of Mayday Parade since we started out."

Additionally 'Anywhere But Here' sees the band exploring new sonic territory on tracks like the stripped-down 'I Swear This Time I Mean It' or dance floor-friendly rocker 'Center Of Attention'. "That song was a little more dance-oriented and poppy than anything else we've ever done because we wanted to reach outside the box a little bit and see how it would turn out," Bundrick says about the latter track. "It still has the same Mayday Parade storyline, but the song itself has an energy that's a little different."

The album's first single 'The Silence' also showcases another side to this upbeat group of guys that may surprise some of their fans in a positive way. "'The Silence' is a darker one," he continues. "It's different from old Mayday stuff, so it's a little scary that it's the first song people are going to hear, but majority of the people that I've showed it to love the song and say it's the best thing we've ever done-and I hope other people feel that way, too."

"I can't force myself to write, it has to come naturally," Sanders responds when asked how he came up with lyrics this time around. "A lot of times it will come when I least expect it, like when I'm riding in the car or while I'm just hanging out at my house at three in the morning; I'll just sit down and it will all come out." As usual, the lyrics on 'Anywhere But Here' are largely autobiographical, but they're written in a way that's ambiguous enough for listeners to relate to with ease. "A lot of the songs are about relationships whether that's involving girlfriends or friends," he continues. "There are a lot of sacrifices you have to make to in order to get to where we are today as a band; I've lost a lot of friends, but that's the way it goes," he summarizes, adding that he wouldn't take back a minute of the journey.
"My lyrics are always about what we're going through at the time and the last few years have definitely been a huge rollercoaster ride for everyone in this band."

When it comes to the band's expectations about 'Anywhere But Here' they'd prefer to let the music speak for itself. "I'm not really sure my expectations are for this album, but I do know that is the best thing we've ever done." 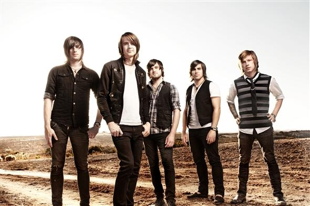