The NATIVE has been more than a magazine since its launch in 2016. In addition to the festival and the publication, The NATIVE has hosted art exhibitions, film screenings, album launches, and everything in between, acting as the melting pot for the ongoing cultural renaissance in Africa and in the diaspora. Providing the soundtrack to this revolution saw the birth of NATIVE Sound System, the culture hub’s in-house sound collective, helmed by NATIVE co-founders Addy Edgal and Sholz.

With deep music backgrounds in their own right - Sholz as a record producer and DJ at Tramp, and Addy holding residencies at Scotch St James in London and 57 in Lagos - the duo have found success providing a diverse array of sounds, ranging from traditional Afrobeat to energetic Hip-Hop, alternative Afro-Pop to eclectic R&B, and much more. This has seen them host dance-floors around the globe, such as Boiler Room Festival in London, AfroNation Portugal & Ghana, and Jangaal in Paris. Their sets have seen guest appearances from Virgil Abloh, Rema, Davido, Skepta, Burna Boy, Odunsi The Engine, and many more. When they’re not playing at festivals, dances and fashion week parties, Addy and Sholz helm the monthly NATIVE Sound System Show on NTS: breaking new alternative music from Lagos, with guest appearances from artists and figures in the NATIVE community.

As NATIVE Sound System has grown, the duo have been supported by their fellow NATIVE co-founders Seni “Chubbz” Saraki - himself an A&R for Odunsi The Engine and Cruel Santino - and Teezee, the cult-figure Nigerian MC widely credited as the pioneer of the Altemovement.

With plans for more parties, festivals, takeover stages, and a debut album of original music in the works, NATIVE Sound System are leading the sound of the new generation on the continent. 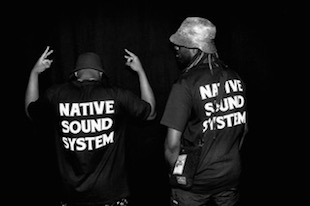