There is a distinct moment in every artist's career when they have to shake off the pressure, shedding external expectation, and look inward.
No more second-guessing, no worrying about the judgment of others. After that moment: pure creation.

For nothing,nowhere., the musical endeavor of Vermont songwriter, singer and guitarist Joe Mulherin, that turning point came midway through recording 'Ruiner', his second album. The musician decamped to New York City, where he spent three months in early 2018 writing and recording the new songs with a vision of staying completely true to himself as an artist. During the process, as moody, shimmering number 'Rejecter' came into being, nothing,nowhere. decided he had to liberate himself from outside forces.

"I was very anxious and very overwhelmed and feeling the weight of expectation on me," he says. "But I think it lent well to the overall sound of the album. Those feelings became so heavy that I had to let them go. Me letting go and taking a deep breath allowed the album to emerge. It was born out of those feelings."

'Ruiner', which follows 2017's breakout album 'Reaper', wasn't planned out or filtered through a long series of revisions. The musician brought pieces of paper covered in broken sentences into the studio, each revealing a fragment of a feeling he'd experienced at some point in the past year. In the room, on the spot, these fragments grew into whole songs, built from an in-the-moment release of melody and lyrics. Several producers, including Jay Vee and Falls, helped nothing,nowhere. find the best way to sonically express each idea, which center on the idea of change. Many tracks took shape quickly, each in a single day.

"I wanted to get back to the basics and back to why I fell in love with music," the musician says. "It's a place where I can truly be myself. No preconceived thoughts. Go in there and treat it like a meditative, Zen experience. This album is like a diary of where I am in my life right now. I've worked my entire life to be here, but now that I'm here I don't really know what to do. The pressure is immense. Things are changing and I'm not used to change. 'Ruiner' is about coping with change and learning to move forward when your life isn't the same as it used to be."

From 'Hammer,' a pulsating number that embraces positivity in a way nothing,nowhere. hasn't in the past, to 'Waster,' which combines current influences like Frank Ocean and James Blake with the second wave emo the musician coveted growing up, the album reflects an artist who is at a crossroads. These songs step forward from 'Reaper', a release that established nothing,nowhere. as a musician inspired by a childhood spent in nature around Massachusetts and Vermont, and who grew up admiring bands like Dashboard Confessional and The Early November. 'Ruiner', which purposefully doesn't feature any guest appearances, pushes nothing,nowhere. to the next level, reminding listeners that it's possible to take on the many influences of your past and create something truly genreless.

For nothing,nowhere., music is about a connection. It's one he finds with fans around the world, who gather to see him play on tour and to listen to his songs online. It's that connection that urges the singer to ignore his fear of performing live and step onstage each night anyway. He works with the Trust for Public Land, a nonprofit that endeavors to conserve and protect public land, which is also about connection, both with nature and with human society. The reason nothing,nowhere. brings his songs out of the Vermont wildness and out of himself is because they have the potential to make a change, however small it may be.

"I just want to keep helping people with my music," he says. "I want to create substantive change through music. My lyrics have a lot of imagery dealing with anxiety and depression, and I've met a lot of people on tour who are struggling with that as well. I want people to know they're not alone. Music can help people feel less isolated. For me, it's amazing feeling to help someone and I hope that's what 'Ruiner' can do." 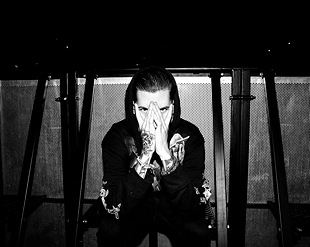