On her third solo album, Rose Elinor Dougall looks into the abyss - the millennial-burnout, Brexit-apocalypse abyss - and she sings, quietly and beautifully, with piano, with guitar, and with a gentle fuck-it attitude.

Louche and with a soft sass, she tells of the impossible disappointments of growing up in 21st-century Britain, about the life decisions we don't realise we're making, about shaking off old habits and navigating failed dreams.

"Everything is falling apart," she sings on the title track 'A New Illusion'', but it doesn't sound sad. Instead it has the very English sweet-sharpness of Kirsty MacColl - and the magic that MacColl had too, in the dreamy jangling pop lifted up by clear folk vocals and a minor-key melody.

"I just wanted to sit at the piano and play, I wanted to return to something essential," Dougall explains. "It was driven by a feeling of disquiet. There's something comforting and solid about that instinctive relationship with music, with playing and singing."

With that essential instinct, Dougall is aligning herself with the tradition of Sandy Denny, Bridget St John, Anne Briggs - English women who sang with proud fragility. "There's something essential and earthy about them," says Dougall. "They're not playing that fey, ethereal, angelic folky-girl - there's something more bloody about the way they sing. I'm not interested in hippy stuff. More and more, I want to listen to women singing - not girls."

The songs on 'A New Illusion' are about loved ones, friends and how they're moving into the next phase of their lives - or trying to.
"How do you reconcile your past successes and failures into your present? And, just what the fuck is going on - what is this country going to look like in a year's time? All these things that seemed so stable and reliable have become very fragile. These songs are about trying to find solidity in fragile territory, trying to find hopefulness in a bleak landscape. "

A lot of the album is about allowing a good thing to turn bad, and then letting that bad thing get worse and worse and worse - whether you apply that to the state of one person's life or the state of an entire nation.
"It's how I feel," she sighs. "I'm singing in a lower register, more quietly. You can hear a few more late nights in my voice."

"There's a lot of reflecting on quite a turbulent twenties that's not necessarily resolving itself in my thirties," she adds. "'Too Much Of Not Enough' is a summation of those ideas. 'That's Where the Trouble Started' began as a conversation with a girlfriend, about how and why we allow dysfunctionality to continue. It's about accepting responsibility, and trying to wear your fragility in a proud way."

There's a darker rage, too, on 'Take What You Can Get', with plunging guitar riffs and panicky violin jags. The album skips and blurs between the public and the private realms, between quarter-life crisis and constitutional crisis. "There's a lot of reflecting on quite a turbulent twenties that's not necessarily resolving itself in my thirties."

Then there's 'Christina In Red' which begins as a melancholy fairytale and blooms into a strange and comforting lullaby. "It's inspired by some early colour photographs from 1913, of a young woman called Christina who's always wearing red. I made a connection between this girl and my brother. The images are so plaintive, so sad, and the song is asking: how does one navigate one's dreams? How do you move forward with hopes and disappointments?"

"Despite some of the themes ostensibly being quite down beat, I really wanted to counterbalance that with uplifting melodies and propulsive grooves that, whilst contemplative, also allow for an expansive, 'wide screen' kind of feeling. There are quite a lot of instrumental moments on the album for that reason. I wanted to let the songs breathe and not become too claustrophobic for the listener."

Dougall has spent almost two decades in music: with The Pipettes when she was barely out of school; touring and recording with Mark Ronson; singing and writing for choreographer Wayne McGregor at the Royal Opera House; guesting on Baxter Dury's last album and working with him on his next one. "I've always appeared in slightly unexpected places," is how she puts it. "I've never belonged to a particular scene or been particularly cool."

She's also made two previous solo albums - 'Without Why' and 'Stellular' - but this is the first time she's co-produced one of them (with old friend Matt Twaites), and the first time she's directed the whole team and the whole record. "This doesn't have the same safety net as other things I've been involved in - it's all on me. I've set myself new challenges, to see what happens."

"I've been making music in London for 12 years and I've become part of an amazing community of musicians - I wanted to celebrate that."
The record includes her brother Tom Dougall, who's also the lead singer in Toy, his bandmates Maxim Barron and Max Claps, Euan Hinshelwood and Joe Chilton of Younghusband, and other old friends from London and Brighton including Thomas White, Lauren O'Dair and Louis Eliot. "It does feel like a really nice group effort - I didn't want to be over-prescriptive, so some of it is quite loose. I wanted to make it about musicianship. I know people who are really good and so I just wanted to allow space for them be really good."

'A New Illusion' is slower and more confident than her previous albums - the themes may be urgent but the sound is more relaxed.
"It's less needy," she says. "I don't feel the same angst about acknowledgement or approval. I decided to trust my instincts, to see if they connect with the world. I've been making music all my life, and this feels like a culmination of those experiences. I feel I've grown more fluent, more confident, more in charge and that I have come closer to my natural sonic habitat." 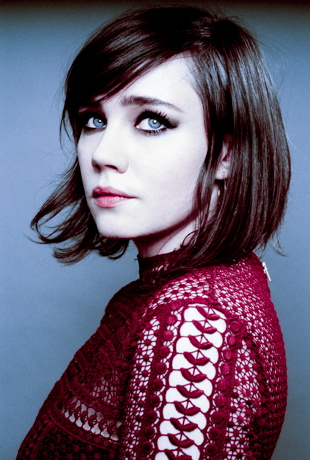