Santigold and Dre Skull initially met in a writing session and bonded over their shared passion for Reggae and Afro-Caribbean music. Dre Skull, known for working across dancehall, hip hop, and electronic music as a DJ, producer and founder of Mixpak Records became an instant creative comrade of Santi's. They initially decided to explore their ideas for a mixtape, which ultimately grew into a 10 song project called 'I Don't Want: The Gold Fire Sessions'. Over the course of two weeks, they recorded the bulk of the songs, playing with Reggae and Afro-Caribbean influences while pushing and pulling their pillars with Santi's singular point of view. As the writing and recording gained steam, Santi unearthed a few gems (ideas she had started with producers Ricky Blaze and Diplo) from her unreleased vaults and she and Dre reworked them, threading together classic Santigold ideas with the spirit of this new work. The incisive social commentary, humor, and daredevil sound that have become hallmarks of her work take on exciting new forms on this project.

Unlike other Santigold albums, which are recorded over long periods and heavily curated and edited by Santi, 'I Don't Want' is a loose and spontaneous project, a snapshot of the infectious energy of the sessions with Dre Skull. "I just wanted to make some summertime music in a quick, fun, light way, like it feels to make a mixtape, but where a classic mixtape has a bunch of songs by different artists and influences, this project has all new songs by me. Also the idea of the Gold Fire sessions, was to just capture a spontaneous collaborative moment in time, where Dre Skull and I just got to play around in one of our favorite genres and capture whatever came. Dre is such a talented producer who easily taps into all my favorite elements of this type of music, blending various influences with ease. He's also super laid back and smart and fun to talk to, and we ordered really good food the whole time!" says Santigold.

Dre Skull was impressed by Santi's vocal stylings and perfectionism in the studio, "Aside from her amazing command over her melody writing process, she is such an amazing expert at controlling her voice to evoke different things. So even singing the same words or same melodies, she is a wizard when it came to using tone and performance to bring out certain feelings in the music. Beyond that, when it came to the mixing stage of this project, she was so incredibly hands on, I'm not sure I've ever seen that level of attention to detail from a vocalist I've worked with. She has super hearing and is weighing in on every aspect of the mix, from kick drum EQ choices to vocal balance."

The record has themes which speak to the current social climate (many of which run throughout much of her work): anti-materialism, empowerment, female strength, resilience, and not compromising oneself but staying one's course even when the tide has turned.

In the decade since her classic debut, Santi has revealed herself to be the most eclectic artist of her generation with a broad influence. She has collaborated with Jay Z, Kanye West, The Yeah Yeah Yeahs' Karen O & Nick Zinner, Beastie Boys, David Byrne, Amadou & Mariam, Q Tip, MIA, Mark Ronson, Pharrell, Julian Casablancas, Lykke Li, Basement Jaxx, Matt & Kim, Major Lazer, Asap Rocky, Diplo, Lil Yachty, Devo, and The Lonely Island.
Her songs have been sampled by Drake & Lil Wayne, and Future, among others. She's had a #1 record on Billboard's Dance / Electronic chart, won an ASCAP Pop Music Award (Vanguard Award), and has been nominated for a Q Award, MTV Europe Music Award, and BRIT Award. Her brand collaborations include a sneaker for Vans, make up collection for Smashbox and an accessories collection for Stance.

Santigold has also had comedic roles on The Office and Adult Swim's NTSF:SD:SUV. Santigold's renowned live show is a showcase for all of her talents as she co-creates every aspect of it including the visuals, choreography and costumes. She has also created singular performances for television including Ellen, Stephen Colbert's Colbchella Special, and multiple appearances on The Tonight Show. 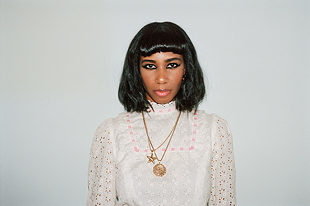