"I don't want to be in an emo band anymore," proclaims Sorority Noise frontman Cameron Boucher. "But I have no problem with people calling us that, because in the strictest of senses, we are an emotionally driven band."

That, is Sorority Noise in a nutshell: part of a movement, but also discrete and determined to break free from the pack. Truth be told, the Connecticut-based quartet - Boucher, guitarist / vocalist Adam 'Scuff' Ackerman, bassist / vocalist Ryan McKenna and drummer Charlie Singer - have always operated a little differently than most of their peers.

For starters, Boucher attended the University of Hartford for jazz saxophone, while guitarist Ackerman studies acoustics and upright bass.
But it's not just their unorthodox musical chops that set the band apart in the underground punk scene. With the release of their Topshelf Records debut, 'Joy, Departed', Sorority Noise - recently named one of the '100 Bands You Need to Know in 2015' by Alternative Press - are poised to break out in a big way.

'Joy, Departed' is more than just the best iteration of Sorority Noise to date; the album also marks a creative shift for Boucher, who draws musical influence from a diverse crop of acts spanning Regina Spektor and jazz trumpeter Chet Baker to The Smiths and Broken Social Scene - and previously spent time fronting screamo band Old Gray. In some ways, the singer says he approached the creative process like writing his very first album.

Boucher started Sorority Noise in late 2013 with friends as an outlet to explore musical styles outside his work in Old Gray. The group then recruited Ackerman and issued their debut full-length, 'Forgettable', in May 2014. Much buzz-and tours with rising stars Modern Baseball and The Hotelier followed, as did a split 7" with Somos and the arrivals of Singer (whom Boucher had played with in Old Gray) and McKenna.

Outside of pure proficiency, one of the more gripping elements of Sorority Noise's musical direction is the band's willingness to speak of personal hardships, including the often-taboo topic of addiction on songs like the heart-wrenching album-closer 'When I See You (Timberwolf).'

"There's so many people having drug problems and a lot of bands who play it safe and don't want to talk about it," Boucher explains. "I think it's important to be shown in modern music. I like to be honest about my past and talk about things that have had me down. As a lyricist, you are responsible for the people who care about your music."

That's ultimately what makes 'Joy, Departed' such an important album: It's life, warts and all, sung by someone who's been through it firsthand. It's not always rosy, but it's real. Above all, it's an album meant to be experienced as a body of work-not single songs plucked piecemeal or shuffled on a streaming service. And for Boucher, he hopes it will show critics and fans alike Sorority Noise has something to say, something he's willing to say as loudly as they'll let him. 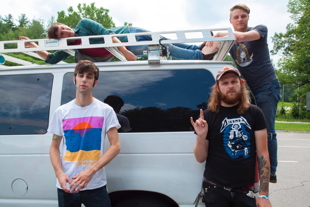