It was more than a decade ago that a Melbourne rockabilly covers outfit called the Runaway Boys wrote a bunch of original tunes and changed their name to The Living End. Ten and a bit years later, that same band have racked up a quintuple-platinum album, two platinum and five gold records, won three ARIA awards, countless other accolades and gathered fans all over the world. What's more important, while some bands seem old and outdated only two or three years after they start, guitarist Chris Cheney, bass player Scott Owen and "new" drummer Andy Strachan are every bit as exciting a prospect as they were way back when - if you need any convincing, just check out a show the next time they come your way

"It's incredible," admits Andy. "At some of the all-ages gigs we did on the last tour, it was just totally insane. There were all these kids, 12-years-old, just picking up the band for the first time, and that would happen every show. It doesn't feel like we're just playing to the old fans at all - every show there are new kids there, which is just awesome."

All of which makes a new record by The Living End a very delicate balancing act - a question of how to serve up something for the new fans as well as the old guard, and all the while keep things moving forward creatively. For the Melbourne trio, the answer to that question came in the form of the one thing they know best - maximum rock & roll.

"To me," begins Scott, "the beauty of our sound comes from the fact that when we get on stage the nerves and the energy sort of take over and a few rough edges come along and give it the extra little bit it needs. It gets to the point that, in a good way, it almost sounds like it's gonna fall apart, and we wanted to play with that sort of energy and get that on-the-brink sort of feel in the studio."

To that end, the boys turned to an old cohort to help them in a new direction for album number four, 'State of Emergency'. Deciding it really is better the devil you know, the band once again enlisted the talents of legendary producer Nick Launay, who worked on their platinum selling second album 'Roll On' (not to mention a whole host of other influential titles, including some of the finest records of the last couple of decades).

"We definitely walked away from Roll On feeling that it had an energy and sonic quality that we liked," explains Chris. "And when we went back to it five years later, we found that energy was still there. That told us Nick was perfect for the sort of record we had in mind this time."

With more than forty demos under their belt, Chris, Scott and Andy went into a Byron Bay studio with Launay earlier this year to begin the next chapter in their already enthralling tale. Coming off the back a very successful 2004 (including huge tours of the US, first with Jet and the Vines and later with Blink 182 and No Doubt) the lads were in high spirits. Andy was well and truly settled in the role he had inherited from former drummer Travis Dempsy just prior to the making of the band's last record, 'Modern Artillery', and Chris had, thankfully, avoided any near death experiences. The plan was simply to go in, lay everything down very quickly and get out again - but hey, who ever sticks to the plan

"Ah, yeah, it took way longer than we anticipated," admits Andy with a laugh. "We set out to have it recorded in three weeks, and have it mixed and ready to go in six, but it didn't quite end up that way."

While Andy is quick to point out that a large part of the extra time might be Nick's fault - "Nick's definitely not a fast worker - he's a procrastinator" - the real truth of the matter is that once they started working on the songs, the band found a new depth to the material that just cried out for a little extra care.

"We're in a really good position at the moment," explains Chris. "We're a better live band than we ever were, we're writing better songs, and we're really still moving forward and learning from our mistakes. With this record we were able to look back and not make the same mistakes, and largely that was attention to detail. This time we weren't happy to just say, 'That's good enough'. I just don't have time to be complacent anymore; I just don't want to have regrets about what we could have done."

Of course, that dedication made for a very interesting scenario - on the one hand, the band went into the studio to make the most blistering, intense album of their career; on the other hand they wanted to make sure that album was right in every detail. The result is a record that highlights something that crowds the world over already know - The Living End play hard, fast rock & roll, but there's nothing dumb about it.

"We wanted to show a bit of the growth in the band, and at the same time not ignore those harder sort of tunes that are such a part of what we do," says Chris. "I think our fans and the public know that there's more to the band than just "Prisoner of Society", but they also know that's part of us. I think we have proven all that, but I still wanted to prove it on a deeper level, to show that we're into the three-piece energetic stage show, but that I also love songwriters like Bruce Spingsteen and Pete Townsend. And I don't see why we can't do that - we really wanted to pull off some great songs."

So while 'State of Emergency' dishes out some of the best punk rock energy of The Living End's career - tracks like first single 'What's On Your Radio' - it also gives fans a better look at that other side they have always known is there. Songs like the Midnight Oil flavoured anthem 'Wake Up', the shimmering Phil Spector-like psychedelia of 'Order Of The Day' or the jazzy edge of 'Nowhere Town' (complete with horns that will have some listeners thinking of Rocket From the Crypt) all show The Living End flexing their musical muscles and minds. It's a very impressive balance, more so because there's never a moment here where you could believe this was anyone except The Living End.

"Yeah well," says Chris with a chuckle, "I don't think we're in danger of becoming AC/DC, even though there is something cool about that the way you know what you're getting with them. But I like our fans to be excited about getting a new album, because they like our sound, and they get that with a few new twists every time. This time, yeah, we're doing some different things, but it sounds like The Living End doing different things, not like The Living End trying to sound like a different band. I think now we've learned that we can play a 12-bar blues, or we can play a really abstract arrangement and either way we can still sound like us."

And why would they want to sound like anything else? 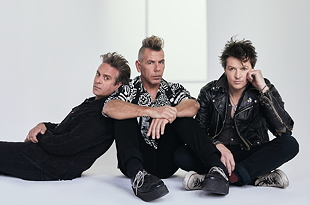