Surfacing online in late 2012, Yung Sherman is one of the key melodic architects responsible for what would later be referred to as "the emotional sound", spreading fast and spanning far wide from it's obscure internet-based spawning grounds; together with Yung Lean and GUD they became both the igniter and catalyst for an entire sub-genre of urban left-field music.

In early 2017 he released his debut EP 'Innocence', a collection of tracks equally influenced by early EDM, mid 2000's southern rap and minor key eurodance, crafted in fragments between tours and other major projects over the past 3 years - original beat drafts that slowly grew into songs fit for a much larger context, a setting where the part hybrid club, part hyper pop productions were allowed maximum elbow room.

Besides putting in work on all Yung Lean's albums, Yung Sherman has provided production for Bladee, Thaiboy, Uli K and Ballout (to name a few), plus collaborations and remixes with Endgame, Baba Stiltz, Lao and Bearface. 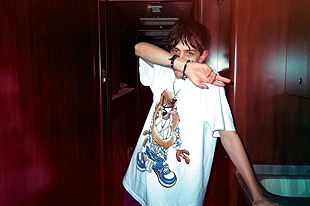