BVDLVD (pronounced ‘badlad’) is slashing and burning through existing genres, creating a raging new sound for the 2020s. Having got into music as an alienated 16 year old stuck in the Oxford suburbs, he found solace in the raw trap metal of early XXXtentacion, Ghost Mane, NIght Lovell, $uicide Boy$ and more. Convinced the British education system was set up to crush creativity, he dropped out of college and set about teaching himself how to record vocals and mix tracks. Fusing the distorted trap coming from the States with underground UK rave culture, he mixed up anger, humour, energy and bass to create a unique, explosive new style that refuses simple categorization, a system-crashing noise set to empower outsiders and misfits worldwide.

Having already found online notoriety as a self-taught digital animator, he set about becoming a musician with the same single-minded purpose. By 2018 he self released his first album Project Jinchuriki, aggressive, lo-fi and seething with energy. Although rough with youthful flaws, it announced the arrival of a bold new talent.

This was followed in 2019 by the second album, BVDIDEA, which saw a huge leap in production values and songwriting, and guest verses from fellow teenage new wave MCs Kxzari and Hen$haw. At this point, BVD started directing and editing his own videos, with the classic Toxic video bringing a frenetic glitching visual aesthetic to match his amped up music. 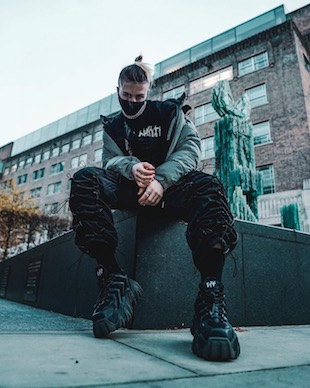