"I'm not trying to talk about love. It's very normal in R&B to do that, but I don't want to do it. I want to be as great as the boys that we have here, but still be a singer. Still do it as a singer."

Meet Amun, a 23 year-old artist from west London. As she says, there's a typical trope in R&B, and especially in modern R&B, of a woman singing love songs to a man. Amun associates with a different breed of R&B - one that goes as hard as any of the guys rapping, and isn't strictly about relationships.

She's always felt that way about music, too. As a child she grew up on all the R&B classics - TLC, 112, Lauryn Hill - alongside classic rap such as Biggie and 2Pac. And the influence of these impactful artists stuck. "There was more to the songs back then - so much more depth. People had more important things to talk about. We all have a platform and there are so many consumers: what are you going to teach someone or tell someone. I would like to try and bring some of that back."

That said, music was never the plan - at least professionally anyway.
Back then, as a teenager, it was about practicing around the house, learning her craft. Amun recorded one of her first tracks at a local youth club, where they also shot a video. "That was the first time someone outside of anyone I knew told me I should do something with what I was doing. It was the first time I believed in it too," she says.

Not too long after, a close friend offered her a job - opening and closing her photography studio. But it was on the condition Amun focused on music and nothing else. "By then I'd written a hundred songs and all that stuff... there was a music studio next door to the photography studio too, so that put me in a different headspace. I could see what I wanted and how easy it was to get it if I just worked hard."

As part of her job at the photography studio, Amun had started modelling. And yet something wasn't right. "I could hear the clicks of the camera and thinking, 'This should be a metronome click'. I thought I was wasting my time in front of the camera." By a stroke of luck, talent, serendipity, or some combination of all three, someone discovered Amun's Soundcloud page - she'd linked it to her modelling profile.

Pretty soon she released her debut EP 'Separate', and pretty soon after that she was signed by RCA imprint Since '93 - the label that's also home to UK Number One artist Fredo, Loski and Serine Karthage, run by industry veterans Glyn Aikins and Riki Bleau. The EP also saw her link up with Skrapz: a rare collaboration for one of the UK's most sought after artists, on a remix of Amun's track 'So Cold'.
Seeing the two together is a perfect example of what Amun means, about making R&B but still going in as hard as some, if not one of, the finest UK rappers.

And so to the next release of material, expected early this year. "I want this new tape to be for the ladies to relate to. Starting off at home, we have lots of female artists, but we don't have female artists that want to get back at the boys, you know?"

"If you look at these concerts, the whole crowd are women, and they're being insulted by the music that they're being playing. But that's all they have to listen to. So imagine there's someone who comes just as hard, levels up, but is on your side - isn't cussing you or bringing you down. That's my mission." 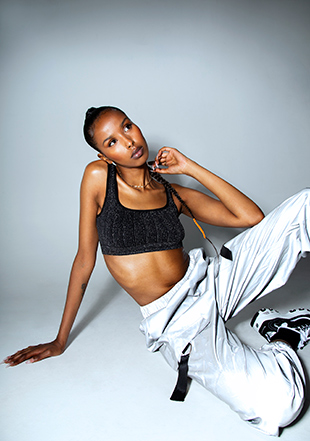