Drawing upon their experiences as five young adults coming of age in unusual times, Blondes capture both the euphoria of adolescence and the nostalgia of growing up in their unique brand of guitar and synth driven indie pop.

Since forming at the University of Nottingham at the end of 2017, the quintet started out by playing covers in bars and building a growing following in their ‘home’ city of Nottingham, that’s since expanded across the world. The five boys met as freshers, when childhood friends Stroudy (guitar & drums) and Mark (guitar & keys), both from Chester, recruited Will Potter (vocals & keys), Alex Davison (guitar & drums), and Tom Herbert (bass) to join the band.

Blondes’ first year in existence was spent playing forgettable shows, writing forgettable songs, and getting drunk listening to ABBA. An ever-growing following of local fans was eager to get their hands onto copies of their self-released EP, featuring crowd favourite Low On The Comedown. 2020 opened with a string of live shows, filling small venues around the city and featuring a sold-out show at Rough Trade.

The real eureka moment for Blondes came in the summer of 2019. Having attended Glastonbury Festival, the boys felt impassioned to continue making music and took this as a sign to finish writing a song that Alex had started years previously; a song about chasing dreams, that would eventually develop into Coming of Age. “Here, something really could happen”, the anthemic chorus became the band’s self-fulfilling prophecy. Armed with belief and a handful of great songs, the five friends agreed that they would not return home after finishing University, instead moving in together to focus on their musical career.

The boys then found themselves locked indoors during a pandemic that had all but shut the music industry down. For Blondes, it became a time to reflect, write music, and do everything in their power to replicate the pub experience they were missing in their own living room. However, unable to play live shows or set foot in a recording studio, it was in fact social media that catapulted the band into the first stage of their professional music careers. In October, their single Coming of Age became an overnight viral sensation on TikTok. Thousands of videos featuring the song appeared across the platform, racking up millions of views. Suddenly, Blondes were trending on the internet. In response, TikTok launched an official ‘Coming of Age’ trend on behalf of the band. Streams of the song went through the roof, and record labels across the world began to take notice of the 5 young friends.

Following this initial success, Blondes recently signed with C3 Records, which was established in 2018 by Charlie Walker and Charles Attal, co-founders of C3 Management and C3 Presents, one of the world’s largest festival producers. A video for Coming of Age will be released in February 2021. Blondes have since been back in the studio recording their debut EP for the label, to be released in the spring, and live dates will follow whenever it’s safe to do so. 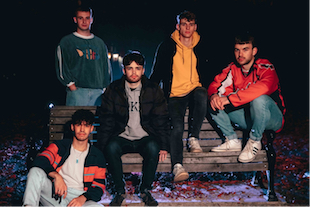