With her new EP 'Boring Connie', Connie Constance is setting out to prove that she's anything but. In the current wave of singer-songwriters emerging from the U.K., the 22-year-old artist stands alone, making indie rock-influenced, off-kilter soul with poetic narratives. It's a sound that has turned heads from the NME, i-D, and The FADER, and landed her a deal with AMF Records, but has few contemporary peers. She's also carving out her own space by writing her own treatments for her fantastical visuals, and hosting her own live music night 'Pep Rally'. That defiantly singular path is fitting for an artist who says that she has always felt like an outsider.

Born Constance Power, Connie gradually became aware as she grew up - in a suburb of Watford, northwest of London - that her school friends and neighbours were all white. Not only that, but she was the only mixed race person in her household, too. Not having any contact with her dad, who is Jamaican and Nigerian, Connie found herself navigating questions of racial identity alone from a young age. "I grew up thinking I was the same as everyone, but as the years go on, you realise your skin means something in this world," she says. "That's something that made me feel on the outside of my own community."

A chance encounter at 14 reconnected her with her brother on her dad's side, and through that meeting, she went on to meet her numerous Nigerian relatives, and build a more fleshed-out sense of family and culture. "I definitely felt more connected with my identity [after meeting them]," she says. "I felt more confirmed that I'm a British person, but I have a whole ancestry that I'm yet to learn. That was crucial for me, especially at that time in my life. I cut off my hair a year later. It was curly again. I started accepting that I am a person of two worlds."

Another way in which Connie felt that she straddled two worlds was in her taste in music. An indie kid to the core, teenage Connie would load up her iPod with The Smiths, The Stone Roses, Arctic Monkeys, Blur, and the Verve. "In school, I would hang around with all the white kids who were into indie and rock'n'roll," she remembers. "And then all my friends outside of school were black and mixed race, so they were into more hip hop and R&B. So I'd be listening to the same music as a group of people I didn't necessarily culturally fit in with - and then with the people that I did culturally fit in with, I wasn't listening to the same kind of music. They were just like, 'Who's this wacky girl wearing all these weird clothes?'"

Connie also separated herself from her peers at school through her pursuit of dance. From the age of eight, she trained in ballet and musical theatre, and was pulled towards the feeling of melodrama and freedom in performance. The experience made her feel disconnected from kids at her school, though, who would be out socializing while she was practicing in a studio. It paid off when Connie turned 17, and successfully auditioned for the presitigous Urdang Academy. "It opened my mind up to different people, and opened me up to art and actually creating something," she says of the school.

While it sparked her creativity, it wasn't ultimately the path for her.
Connie quit dance school in 2014 after meeting Kwesi Darko, a.k.a. producer, multi-instrumentalist, and vocalist Blue Daisy, who set about helping her discover her sound as a musician. He would sculpt wild, beautiful soundscapes, while Connie, an avid writer since she was a child, would create toplines for them. They experimented with R&B and electronic sounds, but after a year or more, settled into making alternative, indie soul, with a dash of hip-hop influence. Together, they crafted her mesmerising 2015 debut EP, 'In The Grass' (Black Acre).

Connie worked with Blue Daisy on crafting her sound, but her unique singing voice was something she worked on alone. As a child, she loved to sing, but realised she was straining to emulate American R&B vocalists and their impressive runs. "I never tried to sing in an indie way, which is kind of weird now," she reflects. "Eventually, I would just try and sing songs without adding anything. I would try and sing a song without adding any kind of flare, or soul - just in my speaking voice." It was through this self-imposed practice that she discovered her true voice: raspy, soul-drenched and unmistakably British.

In 2016, Connie's burgeoning music career was soaring, as she inked a deal with AMF. But in her personal life, she was encountering a new low, as she began to suffer with depression and anxiety. On her hardest days, she found it near impossible to create - but when the fog cleared, she felt more inspired than ever. "Coming out of that space, I was just flooded with information that I wanted to write down. I definitely brought a lot of that into my work." In a few months, she wrote an outpouring of songs, which eventually became the three tracks on her most powerful work yet, the EP 'Boring Connie'.
The EP shows Connie as a more raw and frank lyricist than ever before. The songs focus on her over-analytical tendencies, and her constant inner battle with herself, and yet the sound forms a mellow and smooth counterpoint. The EP title comes from some light-hearted banter in the studio with her engineer, who called her "boring" in jest. She joked in reply that it was her worst nightmare to be called "boring," and it sparked an internal conversation: why did she fear being boring so much?

"I realised, Rah, that's an insecurity of mine. I think that's the reason for a lot of shit I do in my life. It stems from my childhood - I felt excluded, so it could be that I felt I had to prove reasons for people to be friends with me. It's negative because I'm always questioning my self-worth, but it's positive because I'm always trying to back it up. I always do more; I always work hard."

On the piano-driven 'Let Go,' Connie goes back and forth on the subject of a dying relationship. She sings from both her partner's perspective and her own, questioning what she really wants in life in a confident vocal.

Elsewhere, on '1st World Tragedy,' she marries a soft hip-hop beat with fast-paced lyricism about Western obsessions with consumerism and internet culture. It's a critique, she explains, of people who place too much importance on brands and materialistic objects. Meanwhile, 'Bad Vibes' is her most personal song to date, and her most ambitious vocal, gliding soulfully from her high to low range. Reflecting the period of her life when she and her partner were both trapped in a bubble of their shared mental illness, it's "almost too personal," she says, "but I feel like I've got to share it, because that's the shit that I went through."

In the 'Let Go' video, Connie appears to fight herself in a boxing ring, in a visual metaphor for her ongoing struggles. It's the perfect representation of how brutally honest and how nuanced her latest body of work is. "The video goes a bit deeper - for me, it's the visual for the whole EP," she says. "It reflects a fight with myself. I'm in this ring, everyone else is on the outside, and I need to make a decision. I need to finish it. I wanted it to be a visual reflection of mental health. Because when you have [mental health issues], you don't have bruises from the constant fight and over-analysing you're doing. So I wanted the video to be a representation of how it feels inside." 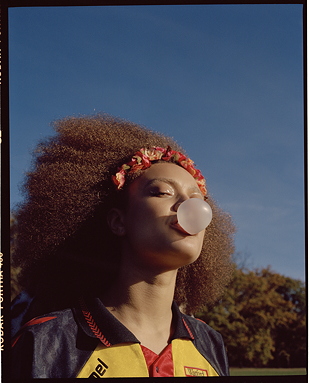