There are multiple moments on Dan Croll's extraordinary second album, 'Emerging Adulthood', which may cause you to question his sanity. Press play on the riotous 'One Of Us' and prepare for the albums purest pop moment. Soak up the dreamy 'January Comes Too Soon' and sense the spirit of Earth, Wind & Fire summoned alongside vintage soul. Delve as deep as you dare into the Tijuana-tinged 'Away From Today' and discover what could be the sound of a shotgun blast and crystal raindrops nestled next to a nod to the Pearl & Dean theme.

Elsewhere, 'Emerging Adulthood' sends languid lounge-jazz in to outer space, sets a metronome at the centre of a song, blends brass and breakbeats, finds common ground between the Beach Boys and ELO and Paul Simon and Pink Floyd and tells the tale of a phantom heart attack.
Throughout, it enchants and intrigues in equal measure. When it ends, you'll wonder what the hell's just happened while still humming along in your head.

"I'm not sure what it says about the state of my mind, but maybe there are bits that are borderline psychotic," laughs the 26 year old multi-instrumentalist. "I've never wanted to stick to one genre. It's either because I'm easily distracted or because my mum brought me up on brass bands, Brian Wilson, jazz and Michael Jackson. I can't see the fun in sticking to one sound."

Since the release in early 2014 of his critically-lauded debut album, 'Sweet Disarray', Dan has purposely proved impossible to pin down. A sonic explorer who approaches every song as a new adventure and uses instruments as inspiration and samples as signposts, he doesn't so much sidestep genres as conquer several at the same time.

The range of bands who have sought out Dan as a support act - from Imagine Dragons, Bastille and Bombay Bicycle Club to Haim, London Grammar and Chvrches - attests to the ambitious scope his songs. Ditto the breadth of brands that synched every song on his debut album, among them Grand Theft Auto, FIFA, Citroen, Clairol, Burberry, Paul Smith and Apple's iPhone 6, which launched across the world with his hit 'From Nowhere'.

"When I made 'Sweet Disarray', I didn't even know what a sync was," says the Stoke-born, Liverpool-based former LIPA student named 'Songwriter of The Year' in his teens. "I was shocked when they kept coming in. And delighted, obviously, that my songs were so relatable."

"I got everything from cheese to snowboards to TVs to trains. Apple was the first. I stepped off a plane to a ton of texts from my mates saying that my song was on the iPhone advert. The weirdest was a San Miguel commercial in which I appeared alongside John Legend."

The success of 'Sweet Disarray' took Dan and his band on tour through Europe and across the States, where he made his TV debut on 'Jimmy Kimmel' and heard his music on the TV series 'Nashville'. Returning to Liverpool at the end of 2014, itching to get started on a second album, he set himself a challenge - to complete it in no more than five months.

"My only plan was to write every day," he recalls. "And my only aim was to make as professional-sounding an album as possible.
'Sweet Disarray' was rough and ready. I recorded it with a mate on cobbled-together equipment in the shitty gym of an old primary school."

As a new year got underway, Dan began his challenge, spending five months straight on his own in a rented Liverpool studio that was basically a brick room with no windows.

"It was torture," he admits. "I could go four days without seeing another living soul. Even when I was due to take a break, I didn't leave. Instead, I'd watch cult documentaries online, usually about conspiracy theories. It was incredibly unhealthy. I started to go mad almost straight away."

Rather than begin with ideas, every song on 'Emerging Adulthood' started with a specific sound.

"My approach to songwriting is always to get a new instrument," explains Dan. "I never start with a sound in mind, instead I try to stumble on one that inspires me. So when I booked the brick room, I bought lots of different keyboards and synths, organs, drum kits, whatever I came across and could afford and just messed around with them. Whenever an interesting sound caught my ear, it became my starting point."

For sexy lead single 'Swim', which features Rebecca Hawley from Stealing Sheep duetting with Dan in the chorus, the sound was a drum sample with a breakbeat feel. For 'Do You Have To', it was a cheap pocket piano Dan spotted on Instagram. For the sensuous, falsetto-strewn 'January Comes Too Soon', the first song written for the album, it was a chord he played on a new keyboard. For 'Away From Today', it was a crazy horn riff on a Tijuana cover of 'The Age of Aquarius'.

"Even something as small as a tempo change can inspire me," says Dan. "Once I have my starting point, I keep stacking sounds on top of it. When it gets too much, I take some of them away. It's the Goldilocks school of songwriting - too little, too much, just right."

For Dan, lyrics come last, although he suspects that, subconsciously, he has an inkling of the events that inspire at least some his songs. Both the playful 'Bad Boy' and the simultaneously sunny and spooky 'Educate' date back to his school days, when he turned his attention to music. The former is about the girls in his class who only dated older boys, the latter about who he chose as role models.

A few of the songs are about relationships, including 'Swim', with its water metaphors, about faithfulness, mistrust and the paranoia of a touring musician. The rocky, reverb-drenched 'One Of Us' took its cue from a documentary about a suicide cult that formed around a vegan restaurant, while the soft rock-styled 'Tokyo' was driven by Dan's jealousy of some musician mates who reached the Far East before him.

The most striking song, lyrically, is the fabulous '24', about Dan's fear of having a heart attack after going on a bender with his band.
"I struggle with anxiety," he says. "It doesn't help that I have no middle ground when it comes to alcohol. I'll go months without touching a drop, then go totally over the top. '24' is about a stupid night, when we were thrown out of karaoke bars and I was so hung over the next day, I thought I was having a heart attack. I'm ashamed to say I asked someone to call for an ambulance."

Last summer, with 22 songs written and demoed, Dan found his dream producer in Ben H. Allen, with whom he spent two months in Atlanta.

"I chose Ben because I love how he's bounced around genres," says Dan. "He's worked with Deerhunter and Animal Collective, won a Grammy with Cee-Lo Green and collaborated with Kelis and Amerie. I can relate to that because I'm just as skittish, genre-wise. I want to be pop, but stay left of field. My aim is to approach pop from an unusual angle."

Which is precisely what 'Emerging Adulthood' does. As magnificent as it is madcap, as brilliant as it is bonkers and as effortlessly addictive as it is odd, Dan Croll's first professionally-produced album is a sumptuous, shape-shifting, surprise-packed pop triumph that keeps the listener gripped for the ride. 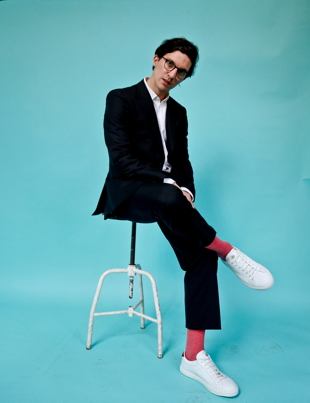