Forming in early 2013, Hellions have wasted little time in establishing themselves as a force in innovative heavy music. With a recent ARIA nomination, sold out headline shows at the iconic Corner Hotel in Melbourne and Sydney's Oxford Art Factory (two nights) and plenty more to unleash in 2017, the Sydney 5-piece is on a sharp upward trajectory.

The band began as a trio featuring Dre Faivre (vocals), Anthony Caruso (drums) and Matthew Gravolin (vocals/guitar) - later adding Josh Campiao (guitar) and Chris Moretti (bass) to complete the lineup. With rock, punk, metal and pop all blended and emboldened by relentless melody and frenetic guitar-work, Hellions have formed a progressive anthemic sound that they can proudly call their own.

Since forming, the group have released three critically acclaimed albums 'Die Young' (2013), 'Indian Summer' (2015) and 'Opera Oblivia' (2016) on UNFD Records. Their third and most recent album, 'Opera Oblivia', debuted at #4 on the ARIA Album Chart and was nominated for 'Best Hard Rock / Heavy Metal Album' at the 2016 ARIA Awards. The album, which also earned a prestigious triple j Feature Album spot, is described by the band as a "glorious celebration and forensic examination of everything that makes being alive worthwhile - from high to low".

They've toured Australia extensively both headlining and in support of mates The Amity Affliction and Northlane among others, also appearing at several Australian festivals including Vans Warped Tour and The Plot Festival. They sold out the majority of their recent Australian 'Opera Oblivia' headline tour and in the Northern Hemisphere they've headlined packed clubs across the UK, recently toured Europe with Comeback Kid and Deez Nuts (2017) and impressed at reputable festivals including Slam Dunk, Groezrock, Impericon and Never Say Die.

The group's blend of aggressive, hardcore-influenced guitar work, punk rock melodicism, frenzied percussion and passionate delivery all combine to form an unrivalled sound, and judging by their rapidly growing fanbase, it's a sound many have been waiting for.

"Bombastic, bold with more sonic plot twist than many of their peers manage in a lifetime." - Rolling Stone

"Flaming-hot Australian punks get ready to set the world on fire." - Kerrang!

"Hellions is one of the most exciting things to happen to the Australian music scene so far this year." - Music Feeds 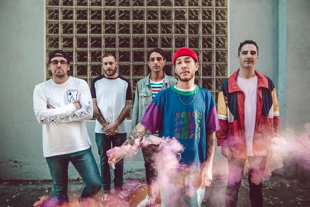