IAN SWEET has been the source of and solution to many of Jilian Medford's deepest anxieties. But now, two years after her soul-bearing debut LP 'Shapeshifter', Medford is confronting that reality with surprising optimism on her new full-length 'Crush Crusher'.
Medford has decided to make the project a solo endeavor once again (as it had been in her salad days in the Boston DIY scene) and took the opportunity to compose some of her most self reflective and emotionally analytical songs to date.

In writing 'Crush Crusher', Medford committed herself to exploring her own issues with self-image, self-respect/worth, and the responsibility she has felt to others. Album opener 'Hiding' was one of the first songs she wrote for the record while living in a frigid Brooklyn apartment during a winter break amidst her grueling tour schedule. In the song, Medford reflects on an interpersonal relationship that fell apart because of an inability to feel supreme comfort in sharing all the pieces of herself with someone. Nevertheless, a hopeful demeanor shines through on 'Hiding' and in her writing across the album, with lyrics that embrace life's hurdles and make them feel a little less scary.

Much of 'Crush Crusher''s songs deal with Medford's internalized pressure to become a caretaker in many of her close friends' lives. As a defense mechanism for her own insecurities, Medford projects a sense of invincibility and benevolence to feel more deserving of the love received from others; we hear this on 'Holographic Jesus' when she repeats the phrase "the sun built me to shade everybody," characterizing the sacrifice and responsibility she feels in ways that could easily go unnoticed. 'Holographic Jesus' ultimately represents a fa ade of strength that Medford has clung onto and, in true Taurus fashion, is stubborn to let go of.

Musically, 'Crush Crusher' is full of dissonant open chords and abnormal progressions, finding beauty in a level of conflict not seen on 'Shapeshifter'. To help achieve this expansive-but-focused sound, Medford enlisted the help of someone who was just as ambitiously experimental in their approach, producer and engineer Gabe Wax (Deerhunter, The War on Drugs, Soccer Mommy). Medford and Wax set up shop at Rare Book Room studios in Greenpoint, Brooklyn, and completed the basic tracking with musicians Simon Hanes on bass and Max Almario on drums. "Coming into a space where some of my biggest inspirations like Bjork, Dirty Projectors, and Deerhunter had all once also recorded, I felt determined to push myself and test every boundary that I may have subconsciously created along the way. Gabe made me feel comfortable with attempting anything," Medford says. By the end of the recording process, IAN SWEET wound up with an unconventional assortment of songs featuring disparate elements of psych-rock, trip-hop, and shoegaze that together forged a sound uniquely her own.

'Crush Crusher''s closing track 'Your Arms Are Water' serves as a thematic reprise for the whole album, telling the story of an inspiring relationship in Medford's life that was drowning in doubt. The song's nuanced perspective captures the record's thesis-that to escape your misery sometimes requires accepting your imperfections. Such compassionate and densely-realized observations make 'Crush Crusher' more nourishing food for thought for fans of IAN SWEET. 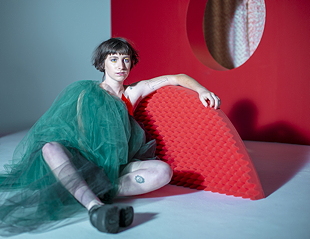