Buoyed by the smashing success of his recent trio of EPs - 'The Monologue', 'The Paradox' and 'The Boy Who Cried Freedom' - Nigerian-born British singer-songwriter Jacob Banks releases his eagerly awaited full album debut, 'Village', November 2nd on Interscope. The 14-track disc is a sprawling, deeply immersive experience on which Banks' throaty, expressive baritone weaves its way through a mesmerizing mix of musical styles and textures.

But whether he's riding a hip-hop groove, fiercely updating soul or jamming to neo-blues, the connective tissue throughout the album is Banks' profound commitment to exploring human themes through his vibrant and insightful storytelling.

"That's how I really see myself - a storyteller in songs," he observes. "I find so much of the time that musicians don't really come across as human because they only celebrate a tiny fraction of what they are. With this album, 'Village', I tried to embrace all that I've lived through and experienced, and that gave me the mental freedom to let go and express everything I'm feeling, the good and the bad. And I think when you can pinpoint what's really going on inside you, those themes are universal. We're all striving for the same things - love, acceptance and an understanding of who we are."

Banks spent the first 13 years of his life in his native Nigeria, where his exposure to music was limited to church hymns and songs from Disney films. It wasn't until he moved with his family to Birmingham, England, that he was hit full-force by Western music. "Right away, I was like a kid in a candy store," he remembers. "There was rock, there was hip-hop, soul and pop music. I would make up own CDs of everything I loved. I couldn't get enough of it."

While studying civil engineering at Coventry University, Banks began toying with singing and songwriting, accompanying himself on the guitar with the four basic chords he knew. "It was all for fun at that point," he says. But then he heard John Mayer's album 'Continuum', which changed everything. "There's a song on it called 'Slow Dancing in a Burning Room,' and I was mesmerized by it," he notes. "I thought, 'It would be incredible if I could have this feeling forever.' So I knew I had to try to express myself the same way. That song put me on my path to being an artist."

While at Coventry, Banks dedicated himself fully to writing, paying local studios 20 pounds an hour so he could record his songs for friends who played them in their cars. Their response was so enthusiastic that he summoned the nerve to try his hand at open mic nights at clubs. "That was the hardest thing and the best thing I ever did," he admits. "You're struck by this fear, but you have to face it right away. You have to grab people's attention and keep it. Very quickly, I learned what songs work, and I learned how to be a performer. Because if you don't, you're done - get off the stage."

Banks' career in civil engineering ended after he recorded an EP's worth of songs that became 'The Monologue', which contained the electrosoul rock-reggae gem 'Worthy'. BBC Radio 1 DJ Zane Lowe jumped on the track, dubbing it his 'Next Hype' record, and the song soon racked up over five million streams on Spotify. "From there, everybody came calling," Banks recalls, who was soon picked by British Emeli Sande to support her 2013 UK tour.

After 'The Monologue', he watched his career soar even higher with 2015's 'The Paradox', which packed his biggest smash so far, 'Unknown' - over 12 million streams and counting; and his Interscope Records debut from last year, 'The Boy Who Cried Freedom'. Raves and encomiums attended the latter release, with no less than Time magazine singling out the track 'Chainsmoking' as one of the year's best songs. With these releases came more touring opportunities, opening for Sam Smith and Alicia Keys.
Following knockout appearances at SXSW, Lollapalooza and Austin City Limits, Banks embarked on his 2017 'Into the Wild' global headline tour, playing to packed houses in the States and Europe. Earlier this year, his debut at Coachella was one of the event's most talked-about performances, offering fans a generous preview of what's to come with his ambitious 2018-19 'Village' tour - fall European dates have just been announced, with an extensive worldwide trek to follow.

"All of this time, I was still figuring out record making," Banks explains. "I looked at EPs as a safe space. I was making music and putting it out at a comfortable pace, learning my craft as I went. Having my music accepted so well gave me the confidence to finally say, 'OK, now I'm ready to make a full statement on a proper album.'"

'Village' gets off to a righteous, roaring start with the gospel blues 'Chainsmoking', peppered by Banks' stinging guitar licks and volcanic vocals. Although the earlier version from 'The Boy Who Cried Freedom' had already made waves, it is this new production that stands as the definitive recording. "The song is so important to me as it celebrates love," Banks says. "Much of love is free, but it can also cost you - your time, your attention, your money. Sometimes love can kill you, but in the end, you have to show up for it, because it's the only thing that makes sense."

To that end, he makes a bold case for that universal need on the hard-edged, pop-reggae stomper 'Love Ain't Enough.' Over a crushing percussive groove and savage piano blasts, Banks wails, "See my love ain't enough!" with revival-meeting force. "Love requires action," he explains. "You have to be willing to fight for it, to go to war for it. As beautiful as love is, it can't exist without you making it happen."

Earlier this year, Banks teamed with Swedish singer-songwriter Seinabo Sey on her heavenly pop hit 'Remember', and the two reunite for the first single from 'Village', 'Be Good to Me,' a striking, hypnotic neo-soul dynamo that buries itself in the thicket of one's senses and doesn't let go.

"I love singing with Seinabo," says Banks, "and it was wonderful to perform with her on this track because its message is so important. So often in life, we're not asking for much; we're asking for the tiniest of things, but they can mean everything. It's everyone's wish: Be nice to me. Be good to me. It's the bare minimum, isn't it? I wish everybody would just listen to that notion and live their lives that way."

On 'The Paradox', listeners were spellbound by 'Unknown', a gripping, confessional ballad that traced the remnants of a relationship gone sour. The song and its meaning haunted Banks, who revisits it on 'Unknown (To You),' fine-tuning its sweeping production and turning in a towering vocal performance for the ages. "As good as the old version was, I didn't feel like I did it justice," he says. "The song has been a friend to me and it's kept me company, so I put my best foot forward and captured the energy that I give it on stage. Now it's right. I believe this version, and I trust it completely."

'Village' concludes on an elegiac note with the 'Peace of Mind', a minimalist yet powerful torch jazz-blues balm for the mind and soul.
"Letting go of somebody is hard and painful, but it's necessary," Banks observes. "I sing, 'Maybe one day I'll wake up and you're no longer in my head,' and it's like a mission statement. It's me saying, 'I'm not good right now, but one day I'll be fine.' It's a song about survival."

To navigate the multitude of moods and textures of 'Village', Banks worked with a host of the world's most talented producers - among them are STINT, Paul Epworth, Malay and Yonatan 'xSDTRK' Ayal. "The reason why I asked different people to produce my songs is because I'm so intrigued by people's minds," Banks reasons. "I have various stories to tell, and sometimes that requires new approaches to production. I just don't feel like the magic in the world lives within one person, but that's the great thing about music: There's room at the table for everybody."

Assessing his own work on his official full-length debut, Banks likens 'Village' to the way he started making music back in the day. "I've made my favorite album to listen to with my friends. I worked with the nicest team of people, and they carried me through this process. From that experience, I now have a body of work that I can share with the people I care about, and that includes the rest of the world. I'm very proud of this achievement." 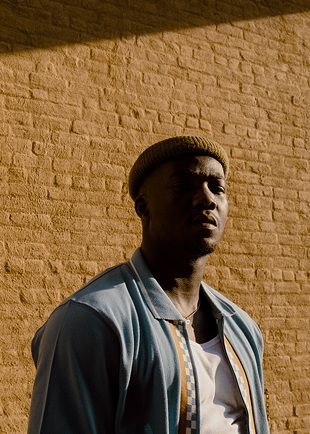