Public Image Ltd (PiL) announce the release of their 10th studio album 'What The World Needs Now...' on 4th September 2015. The 11-track album follows the huge critical success of 2012's 'This is PiL', the band's first album in 17 years.

Album opener and lead single 'Double Trouble' sees the band launching into a statement of intent that will be released on 21st August. The 10" vinyl version will be backed by 'Bettie Page' and also come with additional nonalbum bonus track 'Turkey Tits'.

Widely regarded as one of the most innovative and influential bands of all time, PiL's music and vision earned them 5 UK Top 20 singles and 5 UK Top 20 albums. With a shifting line-up and unique sound, John Lydon guided the band from their debut album 'First Issue' in 1978 through to 1992's 'That What Is Not'. After a 17 year hiatus, Lydon reactivated PiL in 2009 by taking them back on the road worldwide.

Last year the band returned to Steve Winwood's Wincraft studio in the Cotswolds' to record the new album.
Released on 4th September, 'What The World Needs Now...' precedes the start of their 23-date UK/Europe tour, which kicks off in Glasgow on 18th September and follows on from last year's one-off sold-out show at London's Indigo at the 02. The UK/Europe tour will be followed by North America dates. UK/Europe Dates below. Tickets go on general sale at 9am Thursday 21st May. Preceded by pre-sale at 9am on Tuesday 19th and Wednesday 20th May. See www.PiLofficial.com for ticket links.

'What The World Needs Now...' is self-funded by PiL and will be released on PiL's own label 'PiL Official' via Cargo UK Distribution.

John Lydon - After fronting the Sex Pistols, John Lydon formed Public Image Ltd in 1978. Outside of PiL John has released several solo records and collaborations. He also brings quality TV to the masses and has recently released the autobiography 'Anger is an Energy: My Life Uncensored'.

Lu Edmonds - Multi instrumentalist and former guitarist in The Damned, Lu joined PiL in 1986 recording and playing on the album 'Happy?' and co-writing the album '9', adding yet another dimension to the PiL sound.

Bruce Smith - Drummer in The Pop Group and formerly of The Slits - Bruce became percussionist for PiL in 1986 playing and recording on the albums 'Happy?' and '9'. Seen as a drumming virtuoso, Bruce brought his unique style into the fold.

Scott Firth - A bass player / multi instrumentalist that has collaborated and played with a variety of top musicians and bands including Steve Winwood, John Martyn and Elvis Costello. 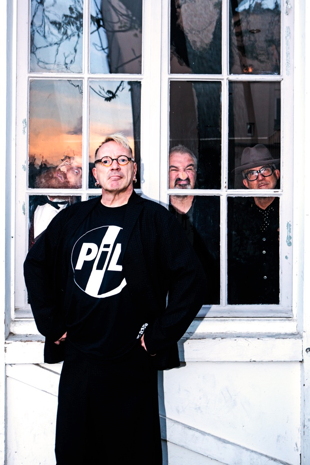