Located on the sprawling outskirts of suburban west London, late-nineties Southall has innately informed the perspective of producer, songwriter and musician SLANG. Its multiculturalism provided a backdrop which allowed a surfeit of influences to simmer into his musical outlook, yet it was an undeniable tough town which suffered from a heroin epidemic that blighted the potential of its youth.
SLANG's own family background reflected the experiences of his peers. His mother endured "one of the hardest lives you could imagine, but she's one of the most happy, bubbly people you could know", while his father was in and out of prison for most of his upbringing.

"Everyone's struggles are relative, and everyone has problems," says SLANG, presenting a very different outlook to what he would've had as a teenager. "It's not about feeling sorry for yourself, it's about recognising that there can be hope at the end of the tunnel."

SLANG's circuitous journey commenced as a part of the initial wave of grime during his time with the Gritty Committee collective and their sets at the pirate station Freeze 92.7, but ultimately he was one of the few of his contemporaries not to end up in jail.

Instead, SLANG stepped from the underground scene and into the mainstream music industry via a succession of wild adventures with Wiley, which culminated in his first release as a producer with 'Bright Lights', a collab between Wiley, Giggs and Roc-A-Fella rapper Juelz Santana.

Under the name Dan Dare, SLANG expanded his horizons to work with mainstream artists as well as people who had emerged from a similar environment as he had: Marina & The Diamonds, Charli XCX and WSTRN to name but a few. At first, he admits, "I was definitely a fish out of water. I didn't know how to write or structure songs, I was just a beat maker. But I believe with music it's always about the strength of the idea."

Despite suffering from anxiety whenever such big opportunities presented themselves, SLANG soon flourished. The turning point was the realisation that "Songwriters' brains work totally differently to rappers. It's like heaven and hell because rappers write with words rather than melody, whereas with singers it's more about the melody rather than what they're saying."

Throughout this period, SLANG took a chameleon-like approach by adapting his approach to lyrics to match the style of the artist he was working with. Despite his success, he remained plagued by echoes from his past: erratic behaviour, drugs and a general inability to deal with his emotions. The solution for his battles with mental health was therapy, which he complemented by writing songs about his own experiences. "It's the most liberating thing ever," he smiles, "and it's really good for my soul."

Liberating they may be, but SLANG's songs are evocative snapshots of challenging times: they're tales of all-enveloping anxiety; of addiction; of misunderstanding in relationships that are born from a troubled past. Their darkness will resonate with a legion of people for whom such issues are a day-to-day reality, but SLANG also possesses a deft turn-of-phrase that allows such stories to brim with engagingly amusing asides.

The dichotomy between SLANG's highly personal storytelling and the ferociously optimistic young man that we see today is a contrast that's reverberates within his debut track 'Yay (You Alright, Yeah?)'.
Its verses address the dysfunctional families that both he and his friends were raised in, but the hook reiterates just how important it can be for young people to discuss their feelings by posing the question, "You alright, yeah?"

It's a song which demonstrates SLANG's courageous capacity for exploring topics which - as anachronistic as it seems - still feel like taboos to this very day.

"Even now when I tell my mum and my brothers that I have therapy, they laugh at me," he states. "There's so much suppression within mental health. I saw someone jump out of a tower block and splatter on the floor, but how much that affects me might be the same as if someone else's mum and dad left each other. It's relative to your upbringing and what you know. When I was growing up I didn't even know what therapy was. I think the best thing is just to be honest. That's what I've had to be. Just talk about it." 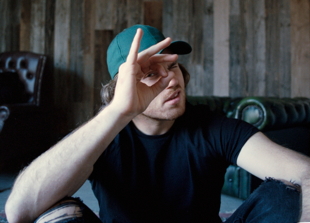