Hailing from Glasgow, Voodoos made their mark on an already bustling music scene after releasing their Debut EP, ‘Late Night, Early Morning’. Since then, they have built up an impressive following and, in the summer of 2019, the band were invited to play several festivals including Y Not, Tramlines and Neighbourhood Festival.

The release of the 2019 single ‘Do it To Myself’ then saw the band sell out two consecutive headline shows in their hometown. The latter of these shows sold out within hours of going on sale and took place in the famous King Tuts Wah Wah Hut. Following this sell-out, Voodoos were invited to embark on tour with The Lathums, putting on impressive shows and completing their first run of dates south of the border. Towards the end of December the band joined The Futureheads on their QMU headline show in Glasgow and Retro Video Club on their sold out headline show in The Assembly Rooms in Edinburgh. This was followed by a highly anticipated sold out gig with the Dunts at SWG3 galvanisers. In just over a year Voodoos have gained over a million streams on Spotify alone while NME says, “Voodoos are a riotous outfit to be missed at your peril”. 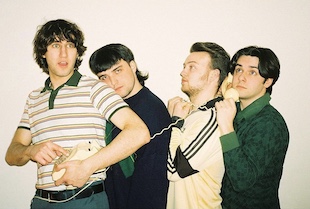