It's been eight years since Scott Kannberg, aka Spiral Stairs, released any new music. He knows that. The years just have a habit of slipping away sometimes.

'The Real Feel' - the Pavement guitarist and Preston School Of Industry leader's 3rd album - arrived in 2009, just as Pavement were announcing a hugely successful burst of reunion shows through 2010. "Then, after the Pavement shows, I moved with my wife to go live in a house in the country near Brisbane, in Australia," the amiable Scott remembers, of those years of seeming inactivity. "Then we had a kid, and that sort of got in the way. I tried to do music, but all of a sudden it was two years later and I'm mowing my lawn and tending my garden."

A little while after that, Scott and family got bored of life in Australia and moved to Los Angeles. "I had the perfect set-up there, so I started work. The way I write songs is, I put on my electric guitar and walk around the house and play it and look at myself in the mirror," he laughs, "and just make up stuff. But because the kid was off at school for three hours a day, I only really had an hour or so to do that. So it took a little time. It was my intention to have done at least a couple more records by now, things just got in the way."

You can't hurry genius - not even the genial, unforced and unpretentious genius that has long been Scott's forte. What's for sure is his second album as Spiral Stairs, 'Doris And The Daggers', is worth the wait.
It's some of the best music Scott's been involved with, and also some of the most personal and emotional music he's ever written, reflecting the life changes that occurred over those eight years. During that stretch, Scott weathered the loss of friends, treasured the joys of fatherhood, lived life as an Australian and even ate haggis meat - experiences that inform these warm, sweetly melodic and soundly honest songs.

"The lyrics definitely have a more traditional 'songwriter' feel," agrees Scott. "I'm getting older, and the music I'm listening to is often more story-based. I love Paul Kelly, the Australian singer-songwriter - he's a great storyteller. I think I was trying to channel some of that, and people like Lloyd Cole, songwriters more from the Dylan school of honesty. It turned into a pretty emotional record, because my drummer died right before we were going to record it. That hangs over it, too."

The original concept for the album was to go to Seattle's Orbit Studios and "record the whole thing in a week, like the old days." Then, a month before the trip, Scott awoke to heart-breaking news: Darius Minwalla, who had drummed with Preston School Of Industry and on 'The Real Feel', and was scheduled to play on the mooted Seattle sessions, died suddenly in his sleep.

Scott was deep-sixed by the news, and it would be another three months before he was ready to return to the studio. By that time, the album had changed - the songs had grown in the interim, become longer, more emotional. "That early idea of the album was more 'garage-rock' than what it became," says Scott. Following Darius' death, Scott went to spend time with his friend, singer-songwriter Kelley Stoltz, up in San Francisco, where they bounced ideas off each other. "His influence made me turn the record in an entirely different direction."

Instead of a week-long blitz, 'Doris And The Daggers' was recorded over a more civilised, considered batch of short sessions at Exactamundo studios in Eagle Rock, California. Long-time low-end foil Matt Harris returned on bass duties, while the drum-stool was adopted by Broken Social Scene's Justin Peroff. The trio cut 30 songs in all, while a number of Scott's close musical friends stepped in to make some key contributions. Peroff's Broken Social Scene cohort Kevin Drew sang on 'Emoshuns', Kelley Stoltz lent guitar to the summery chime of 'AWM', and The National's Matt Berninger lends vocals to the bittersweet, zephyr-light 'Exiled Tonight'. "Matt's a friend," says Scott, "and I actually wrote that song for him to sing - while I was writing it I was thinking, how would Matt sing this? And when I told him about the song he said, 'You have to sing this!' And so we both sing on it."

The songs range a wide sprawl of moods and subjects. The gleeful, charismatic 'Dundee Man' essays a golfing trip to Scotland Scott made with old friend Paul Esposito ("It's a travelogue," says Scott, "but it's also about a guy who's, like, really proudly Scottish. It's a great pub song."). The moody, horn-shaded 'Trams (Stole My Heart)', with its melancholic visions of blankly riding trams "from town to town", is one of a clutch of songs Scott wrote during his sojourn in Australia ('Pig City' and 'Vultures Of Caboolture', the other two chapters of this Brisbane trilogy, will surface as B-Sides, and are well worth tracking down). The anxious, paranoid narrative of album opener 'Dance (Cry Wolf)', meanwhile, is leavened by a stomping, danceable vibe, with Scott allying chords with a Wire-ish feel to a Roxy Music, David Bowie groove. "It's positive, a kind of 'Dance away the pain' thing," says Scott.

'The Unconditional' is an unabashed, lovable anthem to Scott's young daughter, "a beautiful creature, who I helped to grow", who's "getting a little older, and now telling me what to do". "I got kind of nervous writing those lyrics," admits Scott, with a chuckle. "But everyone's got to write a song about their kids, right? It's me trying to be like Van Morrison writing about his kids."
'Angel Eyes', meanwhile, is a salute to lost friends and comrades, poignant but upbeat, and affectionately commemorating fallen bandmate Minwalla - "Little D, such a good friend to me / those rosy cheeks that girls could not deny" - in its third verse. The closing title-track - an unforgettable blast of proggy-post punk, with its infectious chant of "Doris!", and clattering drums from Shudder To Think drummer Adam Wade, inspired by a real-life Doris, the elderly landlady of a bar Scott frequented in Sydney - closes with a goofy vignette narrated by Minwalla, ending on a haunting note.

"I guess I've been writing songs for a while now," reflects Scott on his second album. "I like hearing echoes of things I love in the music that I make. Writing music doesn't come easy to me - it's hard to write a song that's good. But our memories slowly escape us as we get older, and in songs you kind of relive those moments, the things that matter." And that's part of the key to 'Doris And The Daggers' charm, along with the lyrical wit and Scott's unerring knack for tuneage as embraceably familiar as a beloved sweater: that these songs are full of life, stories engagingly told, and a sense of affection for everything that happens within them. You'll keep returning to them again and again, and hope that Scott doesn't wait so long to cut his next batch. 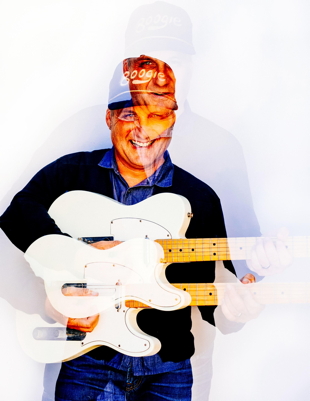